This tool is quite helpful when developing applications that rely heavily on saving data into the Isolated Storage. However, using it is quite difficult. You have to get the product id from the manifest xml, type the full path of the ISETool.exe file and also provide a path where to save the snapshots.

So, I wrote a small batch script that simplifies the whole procedure of using ISETool.exe. The script will get the product id of your application for you and will launch the ISETool.exe with all needed parameters. 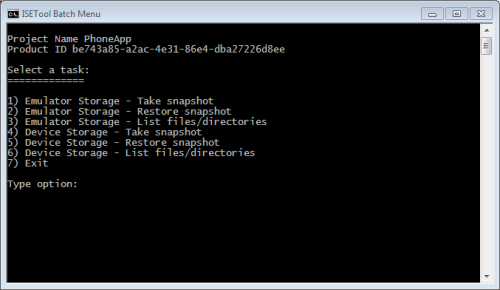 The script allows you to take and restore snapshots. It also allows you to list the files and directories for the root path of the Isolated Storage.

How to use it

Hope you find this tool useful.

If you have any comments or suggestions, feel free to leave them in the comments below.